Microsoft is constantly releasing updates for its various applications. During the Microsoft Business Application Summit, the company announced the release of certain new features, which appear in the recent Power BI update that offers improvements in reporting, analytics, visualization, and data connectivity. In addition, Microsoft provides users with some key features and new aggregations. Here's what's new. 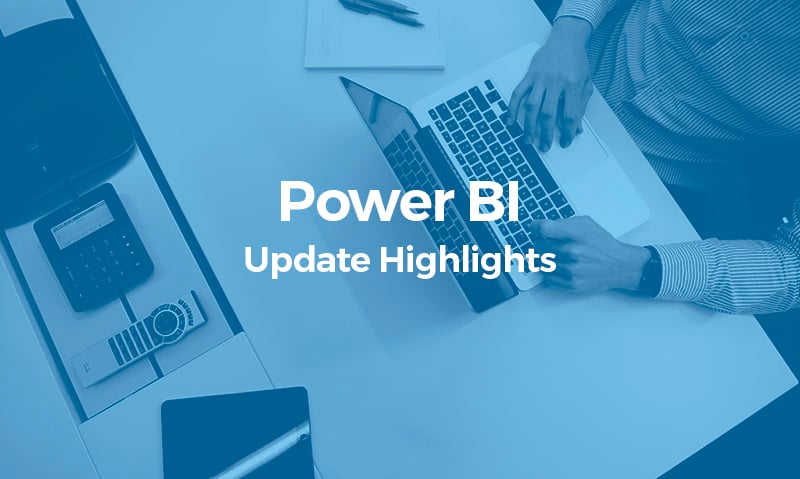 Scatter plots are very useful for detecting any type of relationship between two variables. In Power BI, these diagrams include the Play axis feature, which allows you to animate the graph to show the time. Until now, when representing data with these types of graphs it was possible to use several colors for ease of comprehension, but only in static mode. This update allows you to add colors to the animated version as well.

As far as reporting is concerned, the update also includes general performance improvements.

In the data visualization section, the new update brings several new features in the existing graphics and new visuals:

Counters for the visual Key influencers

The Key influencers allows visual us to detect the relationship between cause and effect in our data. However, although this relationship exists and the graph shows it to us clearly, the consequences of this relationship do not always have major implications. In other words, it may be that we detect a consequence but it doesn't really affect anyone, either positively or negatively. With the new addition of counters for "key influencers" it is possible to see the scope of these consequences.

The AppSource Marketplace has custom visuals that are certified by Microsoft. Certified visuals are those that pass Microsoft tests to ensure they meet code requirements. Certified visuals offer more options, such as exporting to Power Point or viewing in emails. PowerApps has a custom visual, which allows you to include the data visualization that Power BI offers in the applications that can be created with it, which has become certified by Microsoft.

If you want to know more about PowerApps and other Microsoft Power platforms, read our How can PowerApps and Power Flows help you improve your company's ROI?

One of the new visuals available in Power BI is InfoCard. This visual brings with it multiple advanced formatting options, such as large fonts, custom borders, image support with position control, support for backgrounds, images, and labels for data and categories.

Sunburst is another of the new visuals that become available in Power BI. This visual is very similar to a donut graph, but with the difference that Sunburst clearly shows the hierarchies found in the data.

This visual includes features such as customizable arcs, tags and customizable data details, zoom animations, among others.

Cascade graphs are very useful to see the cumulative variation with the introduction of positive and negative values, but they are quite complex to create, as it requires creating hidden series to get the data displayed in the desired way. With this new visual it is much easier to develop this type of graphics without having to carry out the cumbersome tasks involved in creating them in Excel.

Data connectivity is what brings the most interesting novelties:

The Azure Cosmos DB connector is now available for everyone

The Azure Cosmos DB connector becomes generally available after it has been in beta for some time. Azure Cosmos DB is Microsoft's multimodel database service. It enables elastic and independent scalability of storage and performance in any Azure region of the world. With Cosmos DB it is possible to elastically scale performance and storage and take advantage of very fast data access.

The connector allows you to query and import data from Cosmos DB containers into Power BI to create and publish reports. In addition, the connector now allows for shorter runtimes because it supports background SQL queries in Azure Cosmos DB.

What Do We Do? - Customer Engagement

How To Use Power BI For Data Governance

In Case You Missed It... Bismart's Top 5 Blog Posts