What Do We Do? - Elasticsearch

7 things you should know if you are considering deploying Elasticsearch

Elasticsearch is one of the most popular search engines today. It manages structured and unstructured information from multiple sources, which it stores in a sophisticated and efficient way in order to optimize searches based on language/text. Through Elastic you can store, search and analyze large volumes of information quickly and efficiently.

At Bismart we implement the Elasticsearch stack, carry out an evaluation of the type of project and guide you in the choice of the most suitable, efficient and economic architecture.  We provide all the capabilities to configure and develop projects on the Elasticsearch platform as well as integrate and complement it with other solutions. 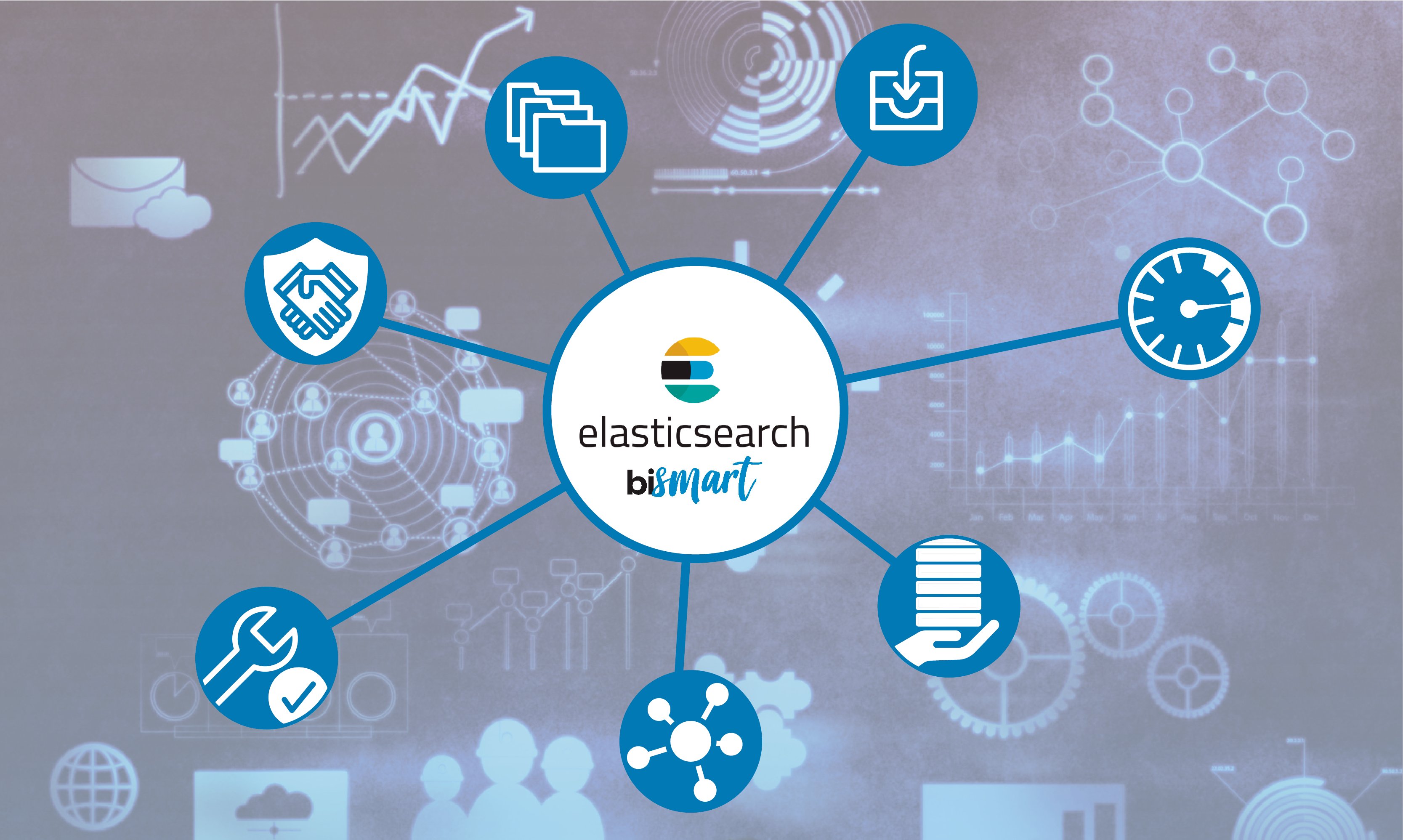 These are some of the features that have made Elasticsearch the search engine that stands out as one of the most efficient:

Elasticsearch is characterized by the ability to index large amounts of data with high efficiency, which can then be consulted very quickly. It is based on an open source project called Apache Lucene which consists of a very powerful indexing and search engine. This high indexing capacity is due, in part, to the fact that it is a distributed system and, on the other hand, to the fact that it has a high-capacity message queue and data transformation system within the stack, called logstash.

The ingestion of data is very fast, powerful and scalable, even in real time thanks to a set of modules called Beats. Beats are agents that stream certain data directly to Elasticsearch or to logstash in the event of any kind of manipulation or transformation.

Depending on the needs of the system we can choose to install one or more of these beats: Filebeat (documents as logs), Metricbeat (to be used as a metrics compiler for services such as Apache, MariaDB, nginx, ...), Packetbeat (network data), Winlogbeat (Windows logs and metrics) and other types.

Although Logstash already acts as a message queue, Logstash itself integrates perfectly with other queuing systems such as Kafka or RabbitMQ, allowing an immense data absorption capacity.

Elasticsearch exposes a Rest API to access the data and create complex searches with its own DSL language. It is also possible to create searches with SQL language. Since the gateway is an APIRest, it allows easy integrations with numerous programming languages, such as C#, JavaScript, Ruby, Python, PHP and others. All this means that you can interoperate transparently on any platform easily and immediately.

Elasticsearch is characterized by extremely fast execution of complex queries. This is because its search system uses NLP algorithms during data indexing to reduce the time it takes to return results.  In addition, it has an enormous capacity for horizontal scalability thanks to its replicated and distributed architecture.

4. Support for large volumes of data

Elasticsearch saves all data in JSON format and the same format to return the results. The power of using a NOSQL database is that it does not need a single predefined schema for all data sources. This allows you to work with many different data sources and create indices (equivalent to tables in a RDBMS) with different structures against which we can then make combined queries. In the same way, since it is a powerful text search engine, we can save unstructured data and do intelligent searches within these unstructured fields.

Data and infrastructure maintenance is very accessible thanks to horizontal scalability. It is a distributed system with an automatic data replication system distributed in the nodes of the cluster.

Given this distribution of information, the system is resistant to failures and loss of information, as the data is replicated in several of the nodes more than once. There is also a native option to create snapshots of the information that can be easily retrieved if necessary.

Elasticsearch is portable to any operating system and is available for most platforms including the Cloud.

In the elasticsearch stack there is a module called Kibana. Kibana is a very powerful data query and visualization system. Kibana itself acts as a front end to simplify the tasks of managing the infrastructure of our cluster and see the state of the data.

It allows the creation of visualizations and dashboards or dynamic presentations of the data, without programming, according to the needs of our environment.

In addition to the functionality of dashboard creation, there is a great variety of dashboards generated automatically, as for example to apply to the environments that we have used Beats for the integration.

In short, Elasticsearch is a very good tool. Here at Bismart, we recommend it, specially in certain cases, such as business analytics or artificial intelligence projects, among others. It is important to carry out an assessment prior to choosing the most suitable solution. We help you find the right solution for your project, get in touch!

What do we do? - Big Data Collection

What do we do? - Artificial Intelligence